skip to main | skip to sidebar

What I'm reading now: If the Dead Rise Not (Bernie Gunther Novels) 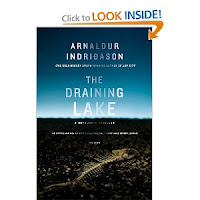 Okay so I read this book earlier in the year; I should have reviewed it when it was fresh in my mind......however as I was looking through old posts I realized I skipped this book and then realized what a crime that is!
The Draining Lake

is one of the best books I read this year, maybe THE BEST. It has all the things you want from crime fiction: a great mystery, heartbreak, family struggles, historical intrigue..... Arnulder Indridason outdoes himself here. Don't be fooled by the seemingly boring uncovering of a skull at the bottom of a lake as the entry point to this mystery...The Draining Lake

will take you to places you never imagined, Soviet era Russia and Iceland and the darkness that communism created.
What I like most about Indridason's books are the simaltaneous storytelling he does of the events that lead up to the previously unsolved murder and the present-day detective work of the main character Erlender. I thought the love story between the college students in communist Russia was beautifully told, and although I didn't know how it would lead to the skull at the bottom of the lake I enjoyed the tale.
This book will please crime fiction fans and historical fiction buffs alike.
GO READ IT!
Posted by Ana Dziengel at 7:35 AM 8 comments:

Well I was reading this book as a "Daily Digest" entry but it was so good I haven't been able to put it down and write entries for the past few days. It was so good I snuck away on Christmas to catch a few chapters....so good I read it by the light of my iPhone while I should have been sleeping.....so good I let my kids wreak havoc on our living room while I finished it up.... do you see where I'm going with this? Nine Dragons

begins with the shooting of a liquor store clerk in South Central, a case assigned to Harry and his partner only because the Southside Division is thin for the week. What appears to be a gangbanger crime may actually be the work of the local Chinese triads (centuries old Chinese gangs), who were collecting payoffs from the liquor store owner. With little evidence to work with except for a bullet casing the vic swallowed, Bosch does the rounds at the Asian Crimes Unit and and forensics until he finally gets a lead on the Triad bagman who collected the vic's payoffs. Simultaneously Bosch receives a threatening phone call warning him to lay off the case, followed up shortly with video of his daughter being held hostage in Hong Kong. From here all hell breaks loose! Bosch is on the next plane to Hong Kong where he must work with his ex-wife and her Chinese boyfriend to find their daughter. I don't want to spoil the plot so from here on out you'll have to pick up the book to discover what happens in Hong Kong. I can say that placing Bosch in unfamiliar territory is exciting because it forces him to depend on others who may or may not be trustworthy. Since Bosch typically trusts no one except for a handful of his past partners the scenarios woven throughout Nine Dragons

pit him against his own nature as cop.
What stood out to me in this book were the relationships Bosch has with the various characters: his newish partner Ferras, Detective Chu of the Asian Crimes Unit (I hope he makes a reappearance in future books), his daughter Madeline and ex-wife Eleanor, and most interesting of all, Sun-Yee, Eleanor's boyfriend with a shady past with whom Bosch is forced to depend on in Hong Kong.
Without spooling the plot line too much I have to say I guessed the outcome of the main case, not because the book is predictable but because it is unpredictable and I was looking for the least likely suspect. Voila! You hit paydirt if you guess the outcome that way.
I also enjoyed the fact that Nine Dragons

keeps things relatively realistic and not overdone. Connelly reigned in his impulse toward over the top endings with this one. I recently gave The Scarecrow

to a relative who has never read Connelly and she complained that the ending was both lackluster and over dramatized. I couldn't have agreed more. I wish I had given her this book as a Connelly primer instead, I think it is one of his best!
Thank you Michael Connelly for keeping Harry Bosch alive and well! I can't wait to see where the next book takes him.......
Posted by Ana Dziengel at 6:46 AM 14 comments: 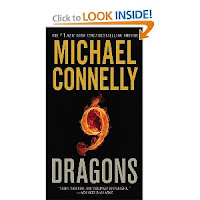 Okay okay okay....my life has been so hectic that for all intents and purposes I abandoned my blog. Though I know I have barely one reader it still bothers me. Anywhoo the show must go on and I have finally started a new book, 9 Dragons, by my fave Michael Connelly.

So far so good. It hasn't started with a bang and I have to say it is not a major page turner YET but I am excited to get back to it. Bosch and his new partner Ferras have been assigned to investigate the murder of a liquor store shopkeeper in South Central, a place where years before Harry had sought refuge during the Los Angeles riots. What at first seems like an ordinary crime in a dangerous part of town where no one looks up at the sight of caution tape is shaping up to be the work of one of the Chinese Triad gangs......I love the possibilities of the Triads in this book especially as I love the work of Xiaolong Qiu ; it is new territory for Connelly and seems promising.

So far the notion that Bosch had visited the store during the riots is not very interesting; I'm a little bored with Connelly's fascination with the riots. They have been a part of numerous story lines of his and I think it's time to put them to rest. I'm also not very thrilled with Bosch's partner Ferras, I hope his character is fleshed out further in the book.

Vote for the Best Thrillers!

NPR is having a Killer Thriller contest.
Vote for your favorite Thrillers here
Posted by Ana Dziengel at 5:17 PM No comments:

Looking froward to reading this book!

How much do I want to read this!
The Watchlist
Posted by Ana Dziengel at 5:11 PM No comments: 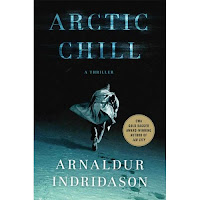 yesterday and I have to say it wrapped up a little too quickly for me. The solution to the crime was convincing but SPOILER ALERT I wish the murderer was on the radar sooner in the book. I'm not a huge fan of stories where the murderer is a character introduced right before the solution of the crime. One of the fun aspects of reading crime fiction is trying to figure out the solution alongside the fictional sleuths. This book disappointed in that respect, in fact, some of the most promising leads were total duds and I'm not sure why they were included, especially the Andres character and his stepfather.

Of course despite my criticism Indraidson has struck gold again, overall the book is a page turner, even if it takes a little bit of time to get into the story. And there is a wonderful "Ah Ha!" moment as Erlender finally solves the crime.

Well done!
Posted by Ana Dziengel at 9:08 AM No comments:

Up to page 311....I hadn't picked up the book in a couple days and I just blew through 150 pages in the last few hours! Wow! For a moment I have to say things got a little dull, too many pages of Erlender and his colleagues interviewing everyone and their mother about the case with very few results. BUT we have now hit pay dirt, especially when Erlender realizes the pedophile the petty criminal Andres mentions is the same guy who lived across the hall from the 10-year old vic. And now he has disappeared....not to mention the fight that the Kjartan character had with the vic's brother on the same day as the murder....the plot has thickened and gets more and more interesting...I'm debating whether I should stay up and finish the book tonight.....
Posted by Ana Dziengel at 12:03 AM No comments:

LA crime fans and vacationing LA crime buffs listen up.... I was beaten to the punch with the tour idea! Check out these out:

I'm working on a self-guided tour myself which will be posted here soon!
Posted by Ana Dziengel at 9:57 AM No comments:

Up to page 160....
Still going strong!! I like the multiple angles the team is approaching the investigation from and SPOILER ALERT I was sorry to see Marion Briem go.....BUT WHAT GENDER IS THIS CHARACTER????? Indridason is not giving in.

I definitely think the brother Niran played a big role in the death of his brother, circumstantial or not. And I want to know more about the victim's mother's boyfriend...something fishy is going on there.

Can't wait to see if my suspicions are dead on or not.
Posted by Ana Dziengel at 5:30 PM 1 comment:

A zillion years ago I had an idea to do a Hollywood Homes style tour of infamous murder/crime locations around LA. You know, a stop at Nicole's condo on Bundy, a drive by the Menedez mansion, maybe stop at the Wonderland murder house....course it's just a dream. Ahem, well someone else seems to share my fascination with crime scenes in LA, only his focus is on gangs. Check out these tours: Gangland Tours!
Of course he has a much better objective than I ever had, although I'm not sure what my objective really was. Hope you don't think I'm too morbid!
Posted by Ana Dziengel at 1:25 PM No comments: 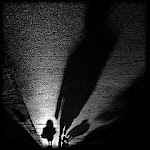 Must Reads:
The Lincoln Lawyer
Lost Light
The Draining Lake
Nine Dragons
Death of a Red Heroine
Death of a Nationalist
Silence of the Grave

It's Not a Man's World Anymore:
In Big Trouble
Dope
Queenpin

Couldn't Put It Down, But Could Have Been Better:
L.A. Confidential
Angel's Flight
A Loyal Character Dancer
The Weeping Buddha
Void Moon
The First Rule